The Home Trust International (HTI): What compelled you to enter design?
Michelle Workman (MW): I wanted to be an artist yet was not interested in the ‘starving’ aspect – felt that design would be the creative outlet I needed, and yet would also finance a beautiful life.

HTI: Who has been the strongest influence on your career and why?
MW: First my grandfather, he believed that I was incredibly talented and would be successful and told me so at every opportunity.
Next would be an early client who was an Emmy Award winning (older) actress, her taste was impeccable, and whimsical – I learned from helping her ‘update’ her fabrics and finishes, that a sense of joie de vivre in the home was as important an element of the design as any other.

HTI: If you could have told your 20-year-old self-one thing, what would it have been?
MW: You have it in you to be successful on your own, your taste, style and avid curiosity will win out.

HTI: Please tell us about your family and your personal life.
MW: Originally from Los Angeles, CA – I am a mother of two boys, married to their father for 16 years, 6 years ago we decided to raise our boys in a more healthy environment than LA, and now we live on a farmlette in Northern Georgia.

HTI: Is there a common thread that runs through all great products?
MW: Quality, beauty, function

HTI: Do you prefer the country or the city?
MW: I love both equally – having grown up in Los Angeles, I will always love the energy, and culture that you find in a city. The country affords you a sense of peace and community not found in a city. Both have beauty but in different expressions.

HTI: What recent project or transaction are you most proud of?
MW: I was hired by a cosmetics company to rebrand their show booths around the world, and the reaction was so great that they have now hired me to rebrand their entire product line packaging.

HTI: In what ways has your company or your industry changed over the years?
MW: I remember at one point someone suggesting that I source something over the internet, and I snorted in disdain. I might have been wrong about that 😉

HTI: The one thing I’ve had forever is:
MW: Good taste.

HTI: Who do you miss the most?
MW: My grandparents

HTI: What makes a room sing?
MW: A layering of patterns, textures, periods, styles, and l’objet that speak to who the homeowner is, their interests, dreams, and accomplishments.

HTI: What place most inspires you?
MW: So far, Paris

HTI: Do you have a favorite artist?
MW: I am a big believer in giving young emerging artists the opportunity to show their work to clients. My list of favorite artists would begin with John Singer Sargent, and would include Tamara De Lempicka, as well as Modigliani. My taste is quite diverse.

HTI: Do you have a favorite museum?
MW: I do quite enjoy the Musee D’Orsay

HTI: What is your favorite brand and why?
MW: Probably Schumacher – They not only have a gorgeous fabric for every possible need, but their marketing and branding continue to set a standard in the design industry.

HTI: When you’re not working where are you most likely to be found?
MW: At home, cooking dinner, playing a board game or curled up with a book.

HTI: What makes a great organization?
MW: Leadership that believes in setting a standard of excellence, not only with their service or products, but also their care of their clientele, employees and partners. When everyone benefits from working together, we all win.

HTI: Why The Home Trust?
MW: The Home Trust sets a standard of excellence in the luxury and design industries that most should aspire to.

HTI: If you could be granted one wish. What would it be?
MW: Most of my wishes have already come true – but I would love to be responsible for a renaissance in design.

HTI: What would you be doing if you weren’t in design?
MW: PR and marketing or fashion design

HTI: Who is on your personal ‘Board of Directors?’
MW: My husband, Alexa Hampton, Gregory Vargo, Stacey Tiveron

HTI: Will you share some final thoughts about design?
MW: Luxury design should be a portrait of the individual and should be about who they are, where they have been, and what they have achieved. 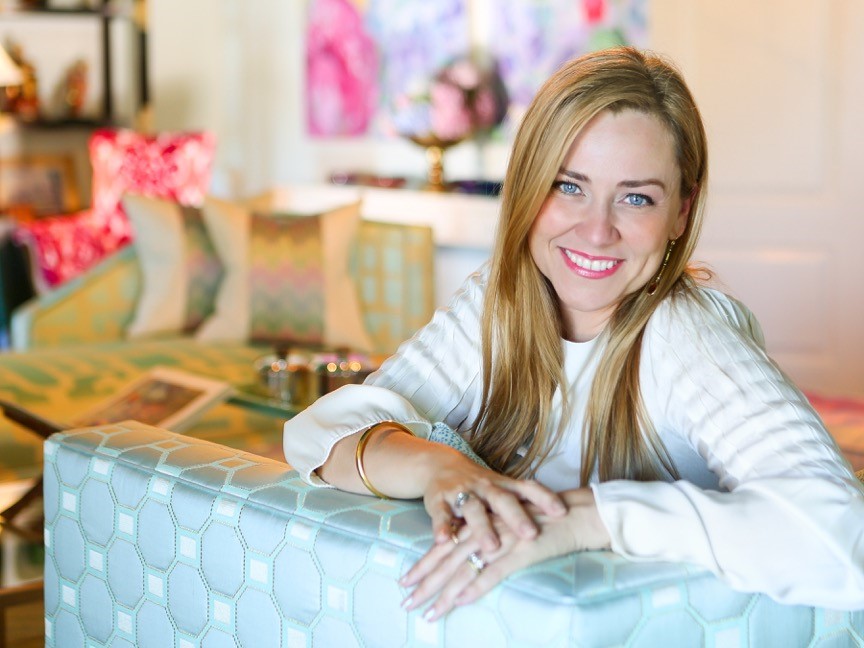 Michelle Workman is one of America’s most sought-after interior designers, with high-end residential and commercial projects spanning from West Coast to East Coast.

Touted as “Showbiz Royalty” by Variety magazine, Michelle possesses an esteemed and influential client roster, from the Hollywood elite (Jennifer Lopez, John Travolta, and Topher Grace, to name a few) and Silicon Valley executives, to Manhattan philanthropists; anyone who desires elegant and glamorous trend-setting design. Michelle is well-known for her ability to seamlessly layer in vintage and modern pieces with patterns and textures, allowing her to create a storied and unique home for each of her clients, with no two designs ever the same.

Recognized as a leader in the field of interior design, Michelle’s aesthetic and taste have garnered her accolades across the globe. Her work has been featured on E! Entertainment News, HGTV and includes multiple spreads in both national and international publications. Considered a tastemaker in her industry, she has been a speaker at many prominent design industry events and venues.

Michelle has more recently added product licensing to her professional services and business mix. Her designs for various product categories are reflective of her style that she describes as “exuberant elegance.” She believes in adding a bit of whimsy, and her first collection for Pyar & Co. launched a stunning collection of inventive and colorful bespoke trims, fringes and tapes that received much acclaim within the design industry press, and social media. Her partnership with French Heritage, includes an extensive case-goods collection inspired by the Art Deco movement, yet incorporates her vision with new and innovative design, modern sensibilities, and access to unique manufacturing techniques. In the year since its launch, it has been nominated for an ARTS Award, and garnered multiple editorial spreads in key shelter and trade press, as well as on social media. Currently, Michelle is developing a wallpaper collection set to launch in 2019. She is also working on designs for upholstery, lighting, and decorative furnishings.